The PROV package is a Python library for the PROV Data Model (PROV-DM), the standard for exchanging provenance data on the Web recommended by the World Wide Web Consortium. I started developing this library since my participation in the Provenance Working Group at W3C (2012) to support recording provenance in various Python applications. As far as I am aware, it is still the only PROV library in Python available. See a short tutorial to have an overview of the library.

I have been involved in the development of various web applications built on the Django platform. Below are the ones that I led.

ProvStore is the first online public provenance repository supporting W3C's PROV standards. It allows users and applications to store and publish the provenance of their data on the Web. Provenance documents can be transformed, visualized, and shared in various file formats, with all the functionality also available via a RESTful API 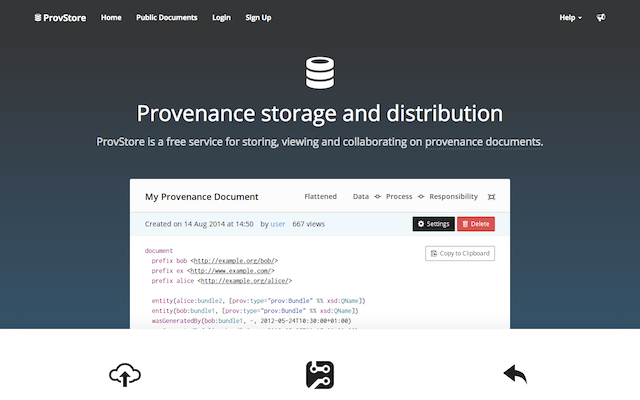 PICASO is an online platform that crowdsources the links between related scientific work and any other relevant entities and events such as the dataset(s) it used, the poster or slides presenting it, the project that funded its authors, and even the presentation activity of the work in a conference session. PICASO encourages linking to objects residing in their own silos, such as linking a presentation on SlideShare to the digital object identifier (DOI) of the original paper. By so doing, PICASO provides the tool for researchers to publicly document the origins and derivatives of their work, or its provenance. 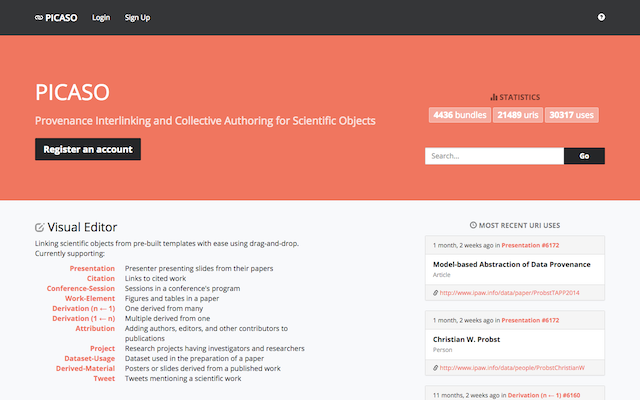